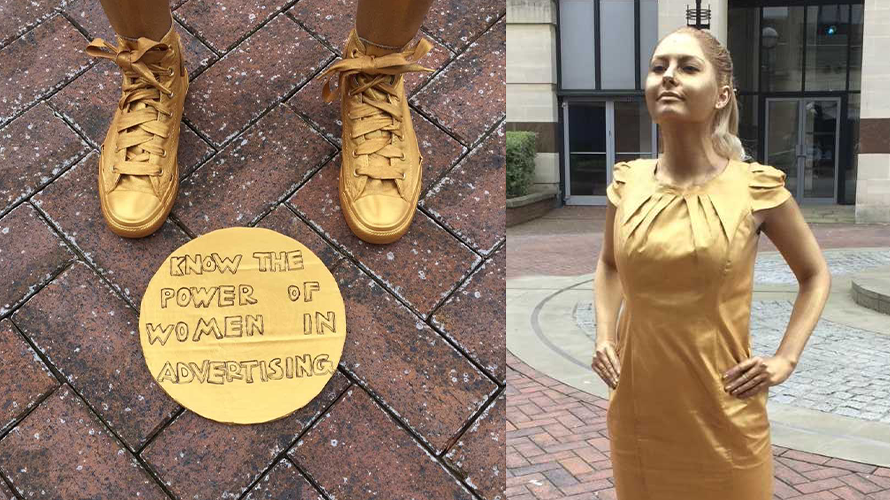 Advertising is an inherently creative industry, and we’ve all seen some unusual applications from students, recent graduates and juniors looking to get their foot in the door by demonstrating their chops outside the usual resume and portfolio link approach.

These efforts range from one duo’s obsessive attempts to get the attention of a Droga5 executive to the art director who posed as a client in an email to multiple Swedish shops. Even TBWA\Worldwide chairman and global director Lee Clow pestered that shop’s creative director Hy Yablonka for an entire year with a self-promotional campaign dubbed “Hire the Hairy” that included everything from T-shirts and bumper stickers to “a hand-crafted jack-in-the-box containing a Clow lookalike.”

All of those “campaigns” were successful—but they weren’t quite as brash as that of Jade Delaney, an aspiring copywriter and recent University of Glouchester graduate. This week, she showed up at McCann Worldgroup’s offices in Bristol, U.K., dressed as the network’s best-known work, Fearless Girl.

As Delaney wrote in a LinkedIn message to McCann Bristol managing director Andy Reid this morning, “Today, I will be arriving outside McCann adorned in gold. Advertising, meet the #FearlessGirlBristol.”

“I’m advertising myself as a determined young creative looking for a placement,” she continued. “Know the power of women in advertising. I can make a difference.”

She delivered on her promise. Reid and group creative director Jon Elsom were duly impressed by both her insistence and her portfolio.

“We are lucky enough to be inundated with the CVs of graduates who are looking to take their first step on the career ladder,” Reid told Adweek. “Jade has been brave enough to stand out from the crowd, which is a fantastic trait for anyone starting a career in advertising.”

He added that the team offered Jade a month’s placement starting on Monday. For U.S. readers, this is the equivalent of a month-long trial run, or a (fully paid) chance for Delaney to prove herself as a junior member of the agency’s creative department.

“It’s pretty tricky getting noticed by employers when you’re a graduate, so I decided to turn into a statue for the day to emulate one of McCann’s most iconic campaigns,” Delaney said. “It was exciting to walk along the street covered in gold paint, and the stunt worked wonders.”

She added, “It’s fantastic to be offered a placement at McCann Bristol, and hopefully I’ve also helped to highlight the power of young women in advertising.”

Fearless Girl, of course, is the award-winning sculpture that made headlinesaround the world after McCann placed it in New York’s Financial District last year on behalf of client State Street Global Advisors.

Last month, the office of Mayor Bill de Blasio confirmed longstanding rumorsthat both the statue and its nemesis, Charging Bull, would be relocated to semi-permanent positions near the entrance of the New York Stock Exchange.

In the meantime, young creatives everywhere will observe Delaney’s efforts and take notes.

Find out what happened last month when Jade Delaney (aka Fearless Girl) landed on our doorstep covered head to toe in gold: https://t.co/uB07mEd6Ga